Click here to use Destiny, our online card catalog, to find a book at our library or any library in the district. You can search by title of the book, author, or subject. Students have access to Destiny their ClassLink, on any computer at school or at home. It can be linked through the LRMS home page.

For the month of November, Book Club is reading books with Multiperspectivity... books that have more than one narrator or point of view.

Choose any book that has more than one narrator and come to the next meeting prepared to share!

Next Meeting: December 8th, 2:00 in the Library

Check out some of these great books in our library.

Cadence Sinclair Eastman is the oldest granddaughter of a wealthy family which summers on a private island off the coast of Massachusetts. Cady has no recollection of what happened to her during the summer of her 15th birthday. The truth, when it emerges, is a shocker!

This Newbery Honor winner is Vawter’s memoir about the summer of 1959 when he took over his friend’s paper route. Because of his stutter, Vawter avoided most situations that required talking to strangers. Frustrated, he just couldn’t get the words out, but he was more interested in the meanings of words, anyway. His teacher taught him some tricks to improve his speech, but they only worked part of the time. Set in the segregated South, this eleven-year-old discovers who his real friends and family are, learns how to deal with bullies, and can’t seem to get certain newspaper customers out of his mind. 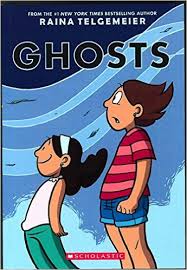 Because of their younger daughter’s affliction with cystic fibrosis, a family decides to move to the coast of Northern California where the weather is more conducive to Maya’s health. Her older sister, Cat feels unsettled here and resents the move. A neighbor takes them on a tour of their seaside town and informs them that it is the perfect place for ghosts to visit. Cat is creeped out and is now having trouble sleeping and being alone. When Maya ends up in the hospital due to her excitement and breathlessness on the tour, Cat blames their neighbor, Carlos. As Cat makes friends and learns more about this beautiful, but spooky area, she begins to understand why the local people enjoy it so much and hold celebrations to invite the ghosts. Should she get involved and try to enjoy it as well, or should she stay out of their business and keep to herself. She badly wants to communicate with her deceased grandmother but is hesitant to adopt the beliefs and local lore. Can she be persuaded to join in the fun?

When Michael and his family move from the city to an old run-down house in the country, he feels lonely even though he still goes to the same school and has the same friends. His mom just had a new baby, who is sick, so she is busy. His dad wants to fix up their new place, so he is busy. Bored and curious, Michael wanders out to the garage that is just about falling in on itself. He sees something in the corner, but can’t quite make out what it is. Is it a heap of bones? Some garbage? An injured animal? No, wait, it’s moving! It’s talking! When Michael approaches it, he doesn’t know what to expect. He confides in his new neighbor and friend, smart, home-schooled Mina. They bring it some food and, together, they move this strange creature out of the garage and into a safer structure on her own property. Still worried about his baby sister in the hospital, this creature seems to know all about it and tells Michael not to worry because it will all work out. But will it? And how does it know for sure? Who or what is this strange creature that changes Michael’s world, his thoughts, and his life forever?

Sorry, but there was nothing found. Please try different filters.